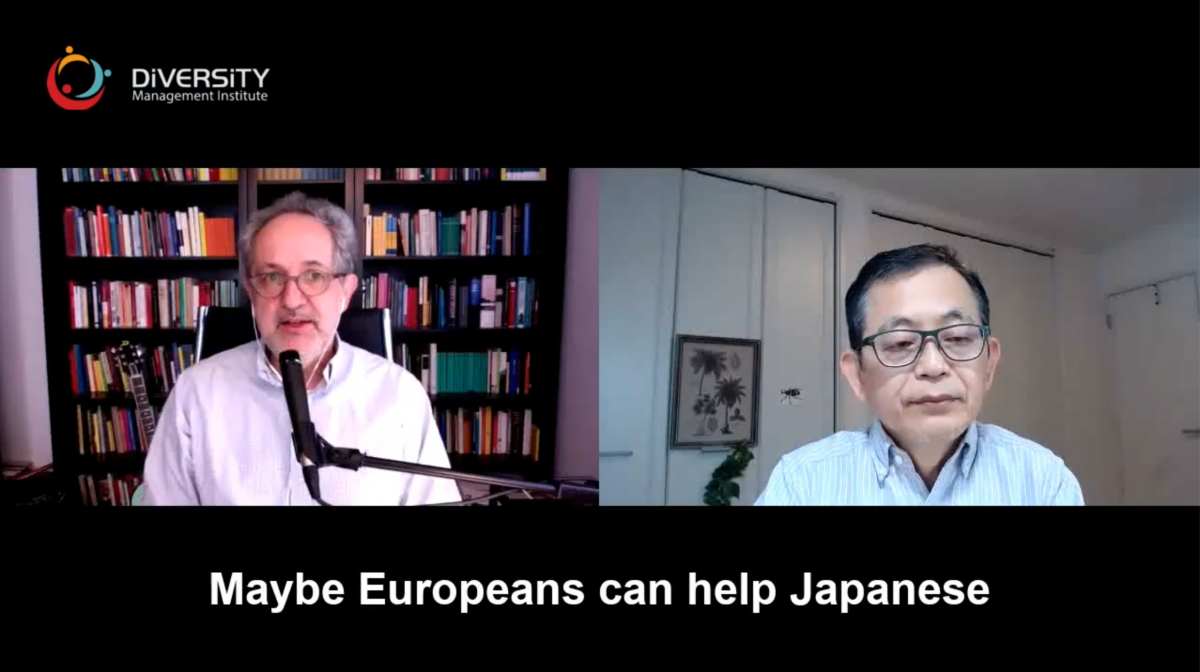 Silkdrive has joined in a collaborative partnership with Kawatani Takashi of the Diversity Management Institute to provide cross-cultural training to successfully do business in Japan, work with Japanese colleagues or clients, or work in a Japanese company.

Recently Mr. Kawatani had an interesting conversation with Dr. Thomas Wilhelm about how Europe and Japan can “Connect”. Below the video with subtitles is shared, as well as full transcript of the conversation. Enjoy.

How to build cross-cultural trust?

Kawatani Takashi:
The other day, I attended a workshop by a UK based consulting firm, specialized in cross-cultural trust-building.

And I told my definition, a Japanese definition rather, of trust. My definition what I think Japanese thinks about trust. And what I said is: commitment to promise. Please walk the talk. Don’t say anything, that you are not sure if you can do that or not.

Because from my experiences of being “betrayed” many times by certain people in certain countries, even in the first meeting, they look very serious and they talk about contract and the fees and all the good things, but nothing happens. That’s the best way to lose trust, one hundred percent.

This definition of trust, how does that sound in a European context?

But I think there’s even more, which I call effective trust. There’s also an emotional aspect. And I think we should not forget this. This is something which is going between the lines. This is if I have the feeling I feel secure in your environment or when I’m close to you I feel comfortable, when I’m with you I like to be with you. This is more than just cognitive trust.

I think cognitive trust is the basis of doing business. If you’re making promises, you should keep your promises. And this is, I think, very important for the Japanese. This shows your reliability, but this is only the basis, I think .

There could be even more. If people really like each other, means there’s more to that than just this cognitive trust, what I call effective trust. There’s a kind of feeling, an emotional aspect as well, to that.

Cognitive trust is exactly what you said about keeping your promises.

Kawatani Takashi:
So first clear the cognitive part. Otherwise, you cannot move further at all. And then you can develop effective trust, of course, that touches the heart of many Japanese.

Kawatani Takashi:
So that’s why I deliberately said that commitment to trust, walking the talk, must be the very basic and important way to build trust across cultures.

Dr. Thomas Wilhelm:
I think it is, you’re absolutely right. It’s the basis. Even if you’re a very nice person, a very nice guy, I like to be with you, but you don’t keep your promises or you’re not reliable, this is not a basis for cooperation, I think.

How can European or Japanese companies benefit from each other?

Kawatani Takashi:
Okay. Now, EPA (Economic Partnership Agreement) between Europe and Japan, there are some conferences starting to bring more investors to Japan and vice versa. How can European companies build business in Japan, do you think? In what areas, how they can assist the Japanese business?

“Maybe Europeans can help Japanese companies even more to globalize.”

Maybe Europeans can help Japanese companies even more to globalize. Sometimes , in some Japanese companies, they still have a very myopic thinking, which means only seeing the Japanese world, still. But not the rest of the world what’s going on around them. And sometimes the expectations maybe of the Japanese headquarters does not fit European environment, the European world. People in Japanese headquarters have to be educated about the real situation in Europe. This is something that they sometimes don’t know about. And this is I think a good aspect where the Europeans could teach the Japanese something.

But if you ask me what are very good business opportunities areas, then maybe I’m not the right person to answer that question. There are a lot of fields where you could work in as a European company and still Japan is one of the biggest markets and Europe as well for the Japanese.

Kawatani Takashi:
Okay. Thomas, thank you very much. I started out with points which I did not expect to mention it just happened in my mind. But we had a very interesting conversation. Thank you, Thomas.

What can we learn from the Japanese when having a discussion?

Kawatani Takashi:
Something that you wanted to say, but I didn’t give you a chance to say or something about this topic?

Dr. Thomas Wilhelm:
When we started, we started discussing about how the japanese don’t want to fight. They don’t want to get involved into a heated discussion. I think there is something we Europeans can learn. Sometimes you can leave an opinion simply as it is. You don’t always need to convince someone or persuade someone. Simply leave it as it is means: just take it as a different perspective.

This is something that we can learn from the Japanese. It’s not necessary always to win an argument. We want to win an argument and that’s not, that’s not necessary all the time. Sometimes there’s a need to convince other people or to persuade them, of course. But sometimes you just can allow that there are different perspectives. It’s simply your opinion. This is my opinion. We try to talk about it, but I don’t want to win you over. And I think that’s important.

Kawatani Takashi:
That’s very nice. That fits very well, I think, with the Japanese culture of appreciating and feeding the discussions, appreciating different ideas of all the members present at the meeting and then bring them back. Bring them back for the next round of internal meeting, another meeting and then some concrete ideas will form. And then it becomes kind of a official , then come into a more pointed discussion. Rather than trying to talk like a machine gun in one meeting or two, then we feel very put off or it’s too much.

Dr. Thomas Wilhelm:
Exactly. I think you can learn to adapt your argumentation to integrate the needs , the interests and the opinions of the other people to get an even better proposal or presentation . And this is what you can learn from Japanese.

Kawatani Takashi:
Well, Japanese not only their cultural foundation maybe going very fragile, but also we need to learn. We want to have more fun at work also. The Japanese are famous to be a good drinker and good communicator. It’s only after five o’clock. So one of my American friends before said, I want the Japanese businessmen to be always drunk .

So please European people watching this conversation: take the Japanese out and ask them to find a nice cozy place where they would open up more. So teach Japanese how to have fun at work!

Okay. That’s all. Thank you Thomas, for your time today.